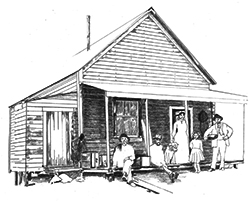 "YOU KNOW A MAN'S CRAZY, GEORGE, if he prefers fishing with the Siwash when there's gold lying about."

A pile of gutted salmon lay in a slippery stack between the two men as Bob approached—men as different as can be: Bob, intense, serious-minded, chiselled features; George, sleepy-eyed, softer through the chin, a ready smile and easy laughter. His Tagish wife, Kate, kept to the task at hand, stretching salmon onto a drying rack, though occasionally she had to drive off the dogs. Her nephew, Charley, sat on his haunches, keeping a steady rhythm of snagging salmon from a bucket, slicing and scooping—offal going to the dog pack, fish to the silvery, slippery pile. Other buckets—brimful of fish fresh from the river—awaited attention. George said to Bob, "And where would that gold be?"

"Up at a creek I've called Gold Bottom. Eight cents a pan, but you better hurry. Me and my boys took out $750 in three months. A lot of folk from Forty-Mile'll be headed that way."

George Carmack, better known as Siwash George for his preferred lifestyle, wore his mustache First Nation's style—the Oriental handlebar dropping just below his chin. He rubbed his hands on a pair of filthy jeans and gazed into the distance.

His brother-in-law Skookum Jim, Kate's brother, approached from the river where a net had been strung across its width to catch the annual salmon run. A Herculean force of a man, supremely handsome, Jim set down a couple of baskets with fish still flopping around and listened in. He may have been Tagish, but he wanted nothing more than to be a white man. What better way than to find a lot of gold?

George said, "You know I'd rather make a dollar fishing salmon, Bob, than chasing after rainbows. Going to make dog food out of this. And then there's logging. Forty Mile needs timber. And I had that dream, you know."

Skookum Jim chimed in; eight cents a pan was good money. Bob cut him short. His opinion of the First Nations was, as he liked to boast, low on the totem pole. "George, if you hurry, you might stand a chance, but I don't want no damn Siwash staking a claim along Gold Bottom."

Jim sucked in his breath. Charley broke rhythm. Kate stiffened. Oblivious to what turned out to be the biggest mistake of his life, Bob paddled off—but not without suggesting George pay him a visit or head up Rabbit Creek not far away, to where he'd earlier spotted some gold. "If you come across anything better than eight cents a pan," Bob called off his shoulder, "let me know!"

This is what you did in the Yukon. You let everyone know—unlike in the States where, if you found gold, you kept it a secret, worked it as long as you could, then shot to kill. Still, George was hard pressed to drum up any sort of promise when he waved Bob goodbye. The comment had stung. He, Jim, and George—and Kate of course—were family. 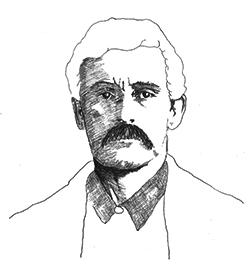 "Never mind, Jim," said George, and then tweaking Kate's pretty cheek, he said, "You'll just have to find your own creek." Which is what Jim did a few days later.

They'd gone to see Bob—where one more time the man had insulted Jim, refusing to sell him a plug of tobacco—and were coming back down Rabbit Creek when Jim shot a moose. The three men—Jim, George, and Charley—decided to camp out so they could dress the meat for Kate back at the Klondike River mouth; and in the morning Skookum Jim woke, went to the creek for a drink of water, and found a nugget the size of his thumb.

They told everyone but Bob. (BW)