by Brenda Wilbee, in Narcissa 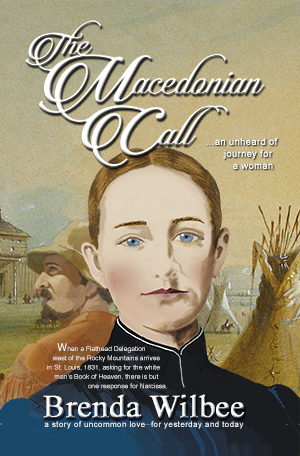 A meeting with an agent last month changed the story arc of a love story that's been in my head for decades. I designed the cover so I have a visual of my characters and the world in which they lived the spring and summer of 1836. Here are my first 14 paragraphs of a new start on this true story of Narcissa Whitman.
.
1.
"Henry Spalding had the misfortune to be born out of wedlock."
--Clifford Merrill Drury, Where Wagons Go
IT WAS HER FAULT. Though she didn't know why. Tall, morose, his hair unkempt and shadows ever in his eyes, the lad taken in by Mr. Rice eleven years before had created quite a stir when as a grown man he registered for a spot in her father's new religious school. A recent convert and older than the rest of them at Franklin Academy, he mistook her singular forbearance as affection. Quickly he became infatuated, then obsessed, even joined the choir at Prattsburg Presbyterian Church, her last bastion of freedom. Her father had been pleased; he needed another baritone. But for twenty-three-year-old Narcissa? Generous by nature and eager to offer Christian kindness, Henry Spalding by Christmas 1831 had become a cross to bear.
.......She bore it with fortitude and became adept at warding off his increasingly bold assumptions with light banter and diversions. But it was getting harder.
......."Hey, Narcissa, he's here."e
........Henry? Curled up in a chair before the fire in her room upstairs and immersed in some theological debate in the Methodist Communicator, Narcissa tossed off the magazine and rose to her feet. A striking girl. Tall, full-figured, prettier than peaches and hair the color of a sunset, she gave her little brother at the doorway a grimace and grin, then kissed the top of his head with an easy laugh.
......."I think he's angry, Cissy."
......."He always is."
......."You didn't remember!" Henry accused before she even reached the throw rug at the foot of the stairs.
......."I didn't realize you were coming by."
......."I told you I was."
.......No point in arguing. She bit her tongue and squared her shoulders. Head high, chin up, she steered him into the parlor. The bustle of her large family at work about the house came as music to her ears, a sweet melody against the discord that perpetually defined Henry. He made for the sofa, milking his beard—black and unruly like his hair. Once seated, she took the chair on the opposite side of the room. He didn't like it, but she smiled it off and smoothed her skirts. At twenty-eight, Henry Spalding was an enormous man, a wall of muscle and bone that unfortunately reflected an evolving theology in his head that recast God as grim as himself and equally touchy, quick to take offense and unbending as steel. You had to mind your p's and q's around Henry—and now God, thought Narcissa with a wry smile.
......."What are you smiling at?"
......."I've decided to enroll in Mrs. Willard's seminary, over in Troy." Where had that come from? she wondered, the words just falling out of her mouth. Once a passing fancy, the idea suddenly took hold and she rattled on, words splashing like water spilled from a tipped-over bucket. And the more she talked—Henry gaping in some kind of shock—the more it made sense. Emma Willard's seminary of higher education was known up and down the seacoast for quality coursework. She could train to be a teacher and study the theology she craved. A perfect solution. Henry couldn't follow her to Mrs. Willard's. Mrs. Willard ran a women's college.
......."I thought you wanted to be a missionary."
......."Whenever the Mission Board," she reminded him, "decides to admit single women."
Next
Created with Pub Site
Created with Pub Site