I Met A Ghost

by Brenda Wilbee, in Skagway AK Etc
I DON'T BELIEVE IN GHOSTS, but I met Alice the summer of about 2012. I was researching Skagway: It's All About the Gold and getting frustrated by everyone's ghost stories. Finally, on a dare, I stormed up the stairs of the Skagway Inn. 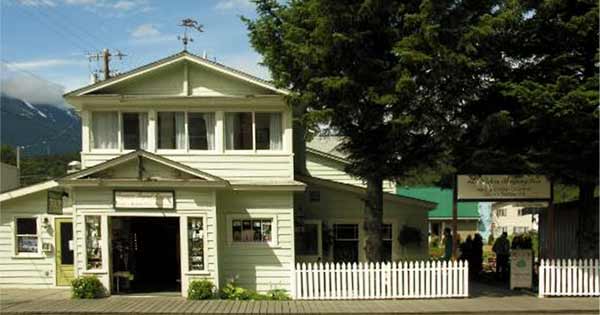 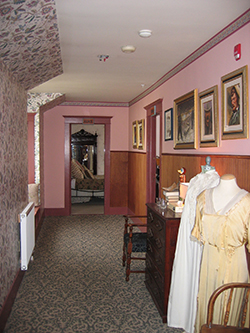 I arrived at the top of the steps full of scorn, stepped into a hallway, and took a quick right, steering for the room at the end, the one I knew had windows overlooking Broadway. I'd always been curious. But when I passed the dress forms standing politely by, hallway decor, the hair on my neck and arms went straight up. What's this? I can't say the experience was unpleasant; more curious than anything else.

I continued on but an energy came gunning down the wall so forcefully I staggered back. Goosebumps riddled my skin. Okay, this is crazy. You're a writer, you're susceptible. You had an imaginary playmate once. The girl downstairs just got you all worked up. I tried again. This time the hair on my arms BUZZZZED.

Shake it off, I said and turned the other way, poking my nose in the other empty rooms without a problem. See? Just my imagination.

Back I went. But just as I approached the dress forms waiting for me in the hallway, the hair on my arms again shot up and the energy I'd encountered earlier pushed hard. Again I staggered back. The hair on my arms settled down. The energy went away. I stepped forward. Yikes. We were in a dance across some invisible line at the dress forms, skin hair rising and falling. The predictability astonished me. Okay, so there's no shaking this off, I said. And I more or less told Alice I was coming in, not to cause harm but because I was feeling nosey.

Whoever she was (I don't believe in ghosts), she did not want my nose in her business. The resistant energy increased with each step, like a steady wind intensifying. I managed to make it to the door, and was startled to sense her standing about two feet away. I was further startled when she suddenly glided kiddy-corner to a doorway leading out to the sun porch, the one with all the windows visible off Broadway. She was leary of me, reluctantly tolerant. I stepped in. 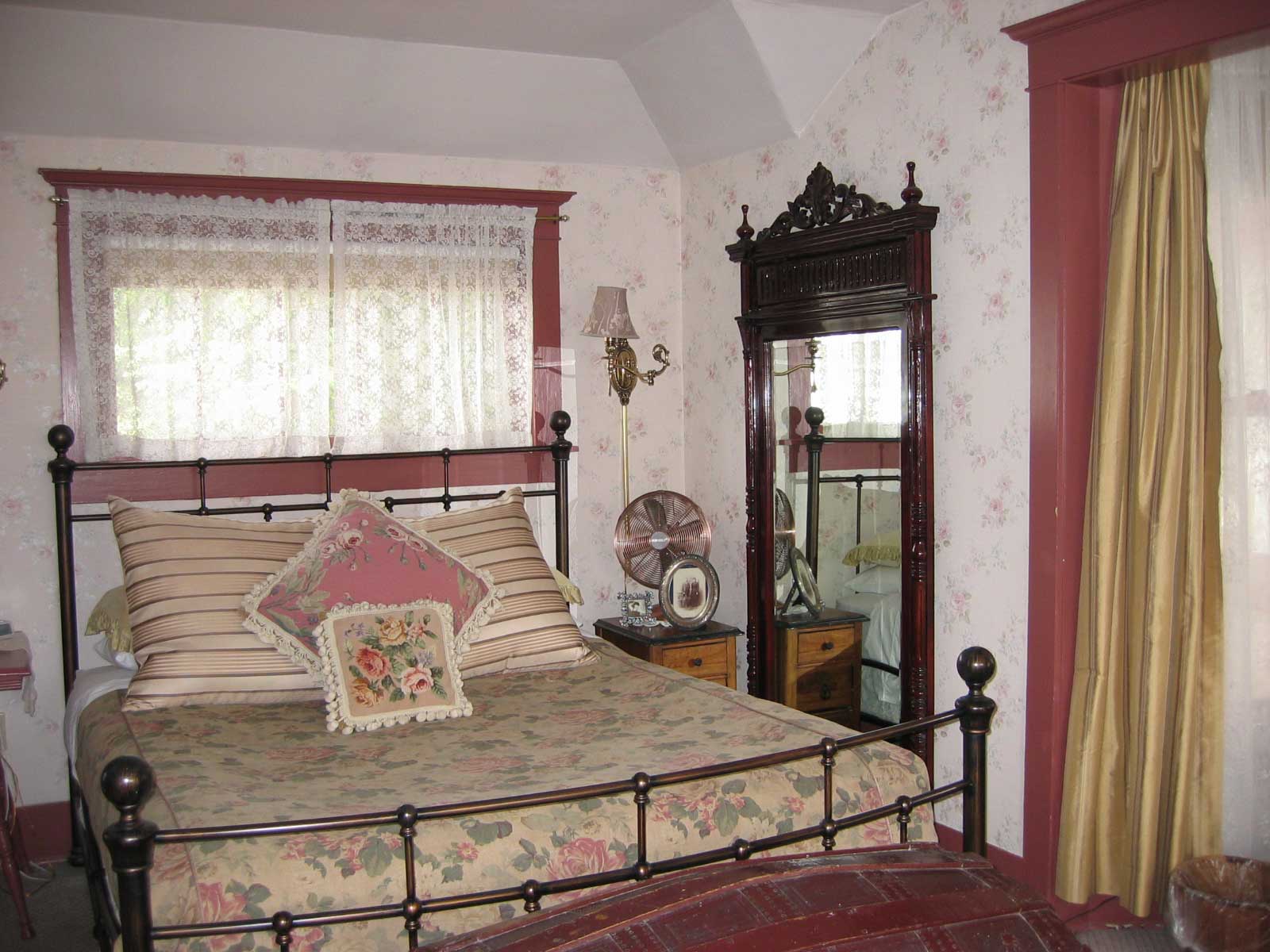 An old bedstead stood before me. Left of the bed, by the door, a nightstand--and a small 1898 book. Intrigued, I picked it up. Alice vanished, everything normal. Curious, I set the book down and looked around. But as soon as I let go of the book, she was back, energy chaotic in the corner. So too the hair on my arms and neck. I picked up the book. She vanished. Bizarre. I put it down. She came back. I did this a couple of times, the predictability of it--as in the hallway--astonishing. What did touching the book have to do with the price of rhubarb? Then came the realization that in my wildest imagination I could never have come up with anything so remotely absurd. All right, Alice, who are you? 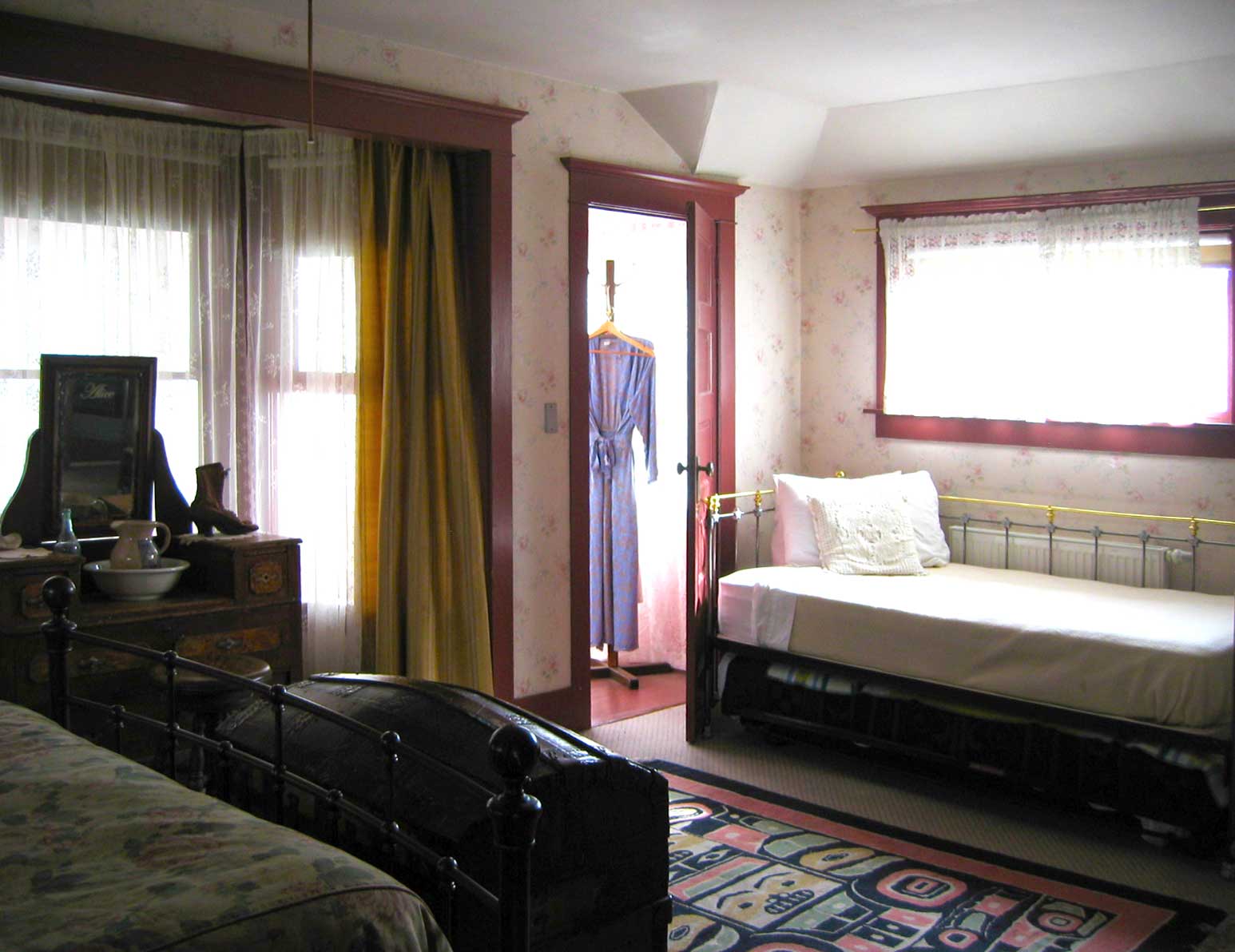 She hovered at the doorway into the sunroom on high alert. I felt badly. I just want to snoop. I took a step toward her. In a wink, she slid into the sunroom. I followed, stepping through and passing a blue dress hanging on a coat rack. She retreated around the bay windows of her room to a corner I couldn't yet see. I kept going, though concerned by her mounting panic--at least that's the way it felt. I stopped the instant I "saw" her.

She was standing on a single bed, "looking" like the stereotypical woman scared of a wee mouse, cowering on a kitchen chair in red high heels and a mini skirt. Only she wore period dress with buttoned shoes and standing on an ancient bed. What am I to do with this? I wondered. Me, who doesn't believe in ghosts. What follows makes no sense at all, and sane people must conclude I'm nuts. But, God's truth, this is what happened. 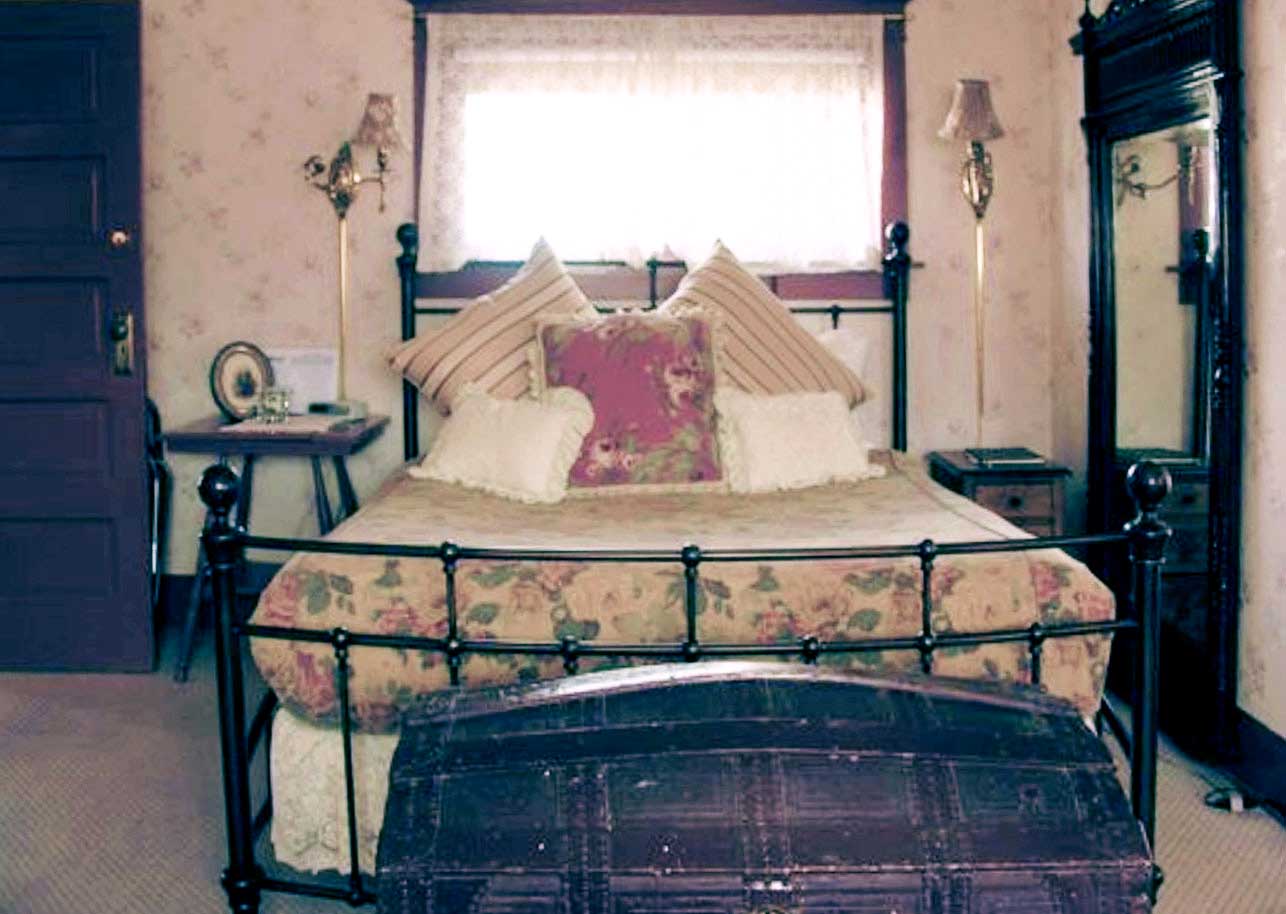 I backed away from her, even as she came off the bed in a frantic attempt to get past me. I was so rattled, I paused at the doorway. I didn't want her to mow me down. What then? She squeezed by me so closely I flattened a hand against my abdomen and went up on toes in an effort to give her room. Her tumultuous energy pressed my spine against the jamb, and before I could catch my breath she beelined up the right side of the bed, against the nightstand and full-length mirror on the wall. She eyed the door across the bed--as if to sprint across the mattress at any moment and escape. And this is where it got weird. I started talking to her.

I wanted to know why she was hanging out in a room for (maybe?) a hundred years. The front structure of the Skagway Inn had been the original home of Skagway's only Jewish family in 1919. But the owner had expanded over time, bringing in brothels and cribs and other gold rush haunts, adding them to the original in order to accommodate his growing family. Was she part of the gold rush, then, with a sad history in Skagway's early, very seedy days? Why couldn't she just get on with her death or life or whatever it was that confined her here to this space. Isn't it  boring? I asked.

The upshot was that she calmed down, and then totally shocked me by following me out of the room. One step beside and behind me. Seriously. Down the hall, down the stairs, out the side door, through the garden, across Sixth Street. We stood on the boardwalk, staring at each other. Only she wasn't visible. What in the world? I asked, looking back at the inn and her room out front, the sunlight bright in her sunroom. 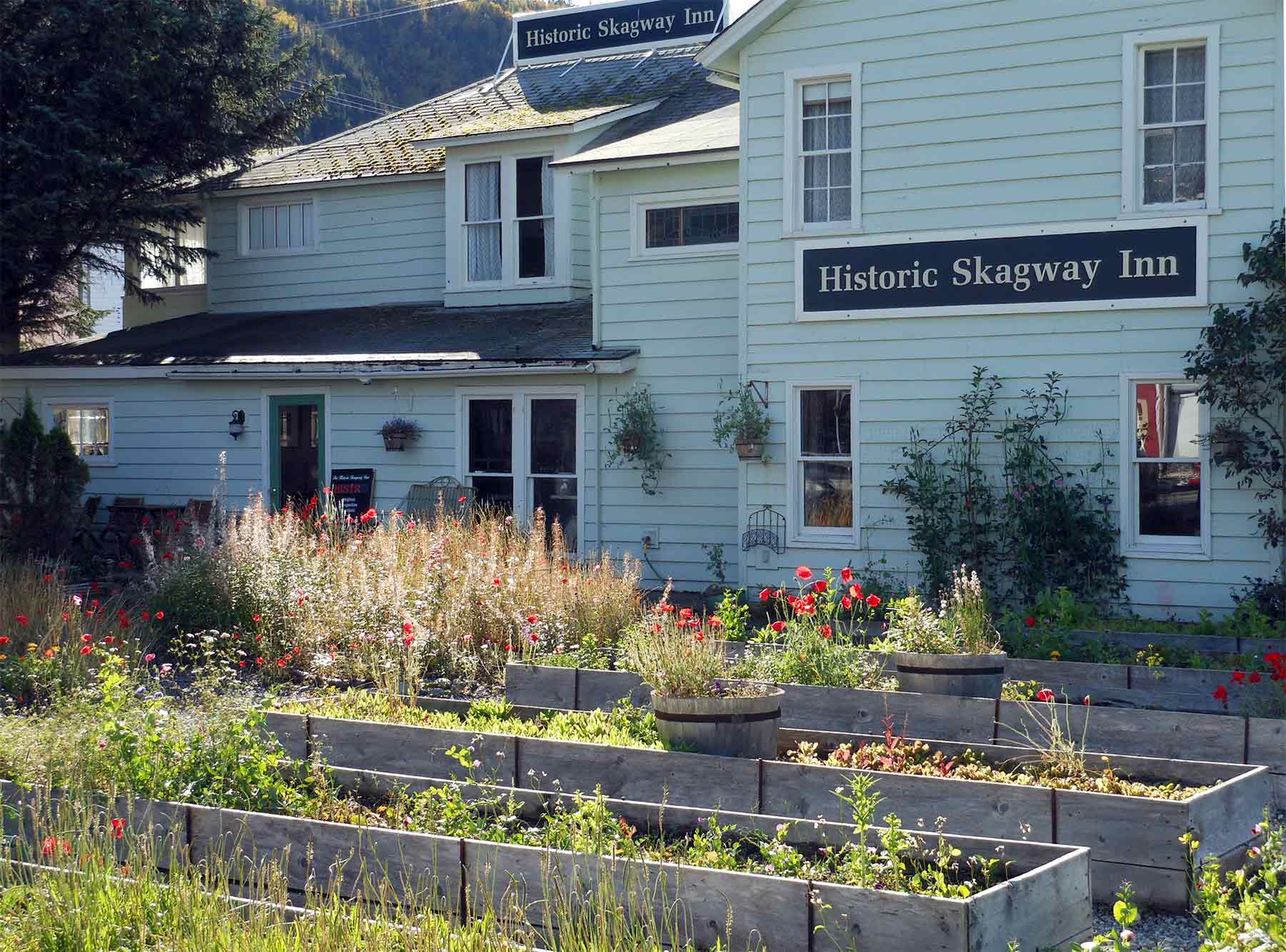 She seemed bewildered to find herself outside. I sure was! I'm going to the library, I told her, not knowing what else to do. Do you want to come along? She did not. I know, I said, let's go talk to my boss. He'll know what to do. I pulled out my cell, put a call into Trent, not exactly a conversation anyone ever has with their boss. But I knew he was into Skagway's ghosts. He was. He said to bring her down to the office. But when I told Alice what was up, she vanished. Gone.

I haven't seen her since. I've returned to her room many times over the years. But it's always empty. Where did she go? What did she do?

Here's the truth. I don't know, but she's been calling me whenever I return to town. It doesn't matter I hang my hat, she finds me. "Brenda!" she calls in audible voice, always startling me. Usually it's in the evenings when my mind is on something else. Many times in the middle of the night, waking me up, sometimes so persistent and urgent I get up and try to find her. She sounds like she's in trouble.

Tell me, what am I to make of this? I don't believe in ghosts. But I met one. And she keeps calling.