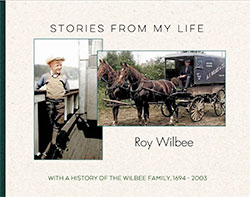 ​​I CAN NEVER LEAVE WELL ENOUGH ALONE. When my father asked me to do something with his memoir nineteen years ago I could have just published it. But no, ever the over-achiever and infinitely curious, I am two decades later thick in the hidden history of "the Wilbees."

If Dad writes of memory lane, I write the landscape. Maps, photos, sidebars, history dating back to 1694. I'm currently finishing up his chapter on Little Grandpa, a real character who, before his life was over, created a bit of tension in the family—and sometimes down at the police station.

"My Ties With Little Grandpa"
But of the many things that can be said of Little Grandpa, there is this: He was a man who took Jesus seriously, definitely Woke. He politically advocated for social justice, and always, unrelent-ingly, spoke up for the underdog: minorities, the poor, the sick—though it was agreed within the family that he was like a dog to a bone and often his own worst enemy. A fascinating and colorful read, thank you, Dad, but wait, what's this? A photograph. Of whom? When? How do they fit in? 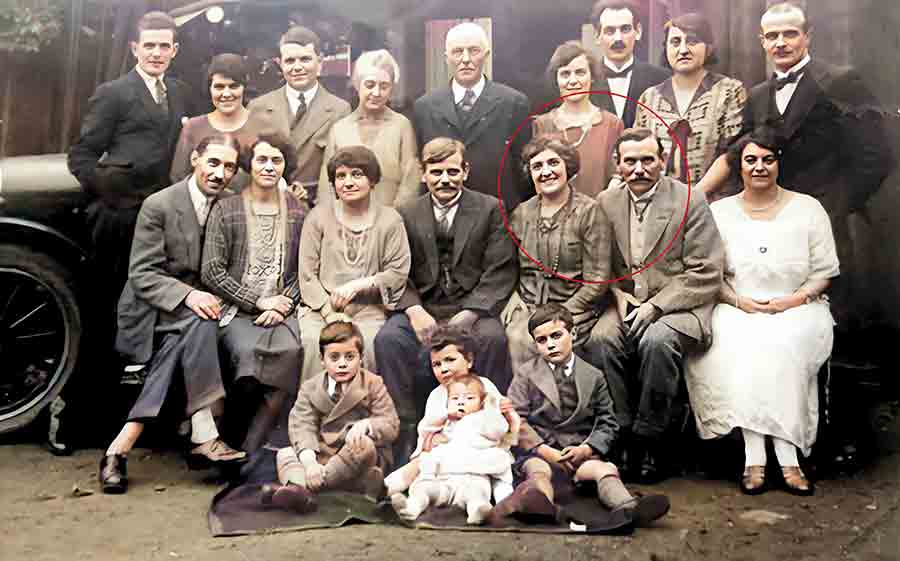 Wilbee/Knight/Gibson/Wilson Extended Family 1923. Ernest and Francis Eva Wilbee are circled in red.
Courtesy of Ann Gibson, not yet born, little sister to the girls in the front row.
Due to the internet, I've gotten to know a few cousins from Merry Ole England who are as enmeshed in our genealogy as I am. Brothers Little Grandpa (Arthur) and Ernest once upon a time, from 1889 - 1906, owned a grocery store in Croxley Green, WILBEE BROTHERS, about 25 miles north of London. My cousin Ann Gibson is Ernest's great-granddaughter; I am Arthur's. And so we get along like a house a fire. She sent me the above photograph of our extended family, minus Arthur and all of us on this side of the pond, Arthur having emigrated in 1911. Ann sent the photo á la mode—all important players named. But wait, what's this she sent? A telegram?

DATE: June 24, 1940. From Arthur to Ernest. ARRANGEMENTS MADE SEND ALL CHILDREN SEND PARTICULARS. 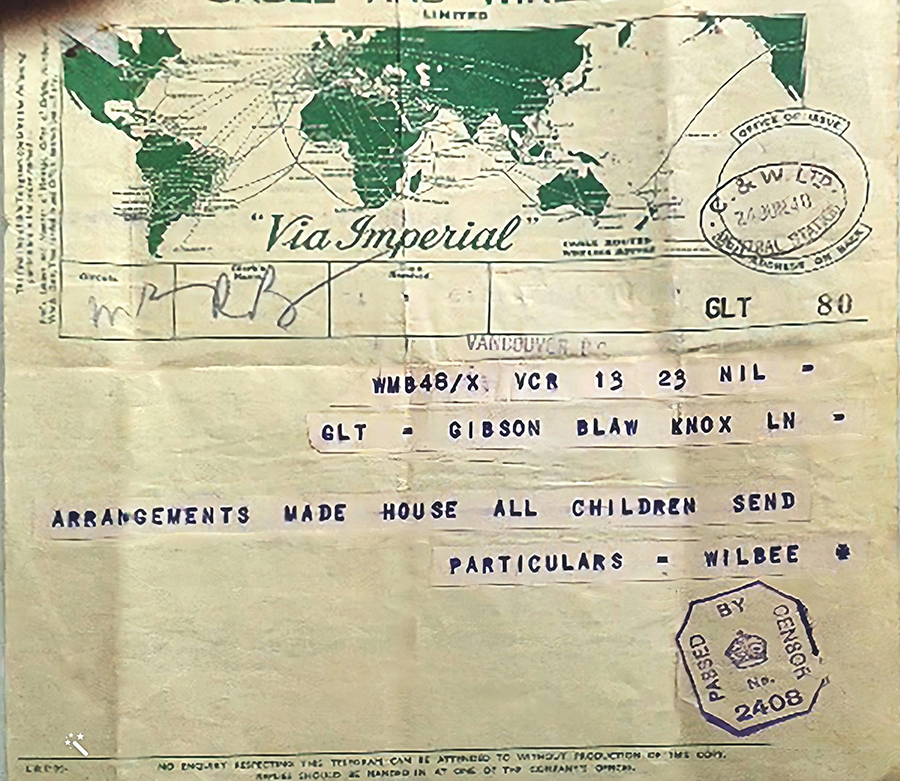 I have found no other correspondence to frame whatever this story is, and thus begins another diversion from the task at hand. Arthur and Ernest are 72 and 71 years old by this time. What are these two old men up to?

Let's put them in context. Seven months before, on September 1, 1939, England declared war against Germany and immediately began putting together Operation Pied Piper to get children to "anywhere but here." By the war's end, millions had been sent to rural areas throughout Great Britain and other British Commonwealth countries like Canada, Australia, and New Zealand, even the United States. By the following spring, 1940, Hitler had pretty much mopped up Europe and was setting his sights on good ole' England. This is when Ernest wrote to Arthur, asking him to take, I assume, his Gibson grandchildren: Brenda (18), Theresa (16), Zoe (14), Jean (12), and John (10). Their little sister, Ann, had not yet been born. The boys in the picture were, in 1940, 19 and 17—in no need of evacuation but I presume off to war. But back to Arthur and Ernest and the Gibson grandchildren. Before the "particulars" could be arranged between the two brothers, the unthinkable happened. 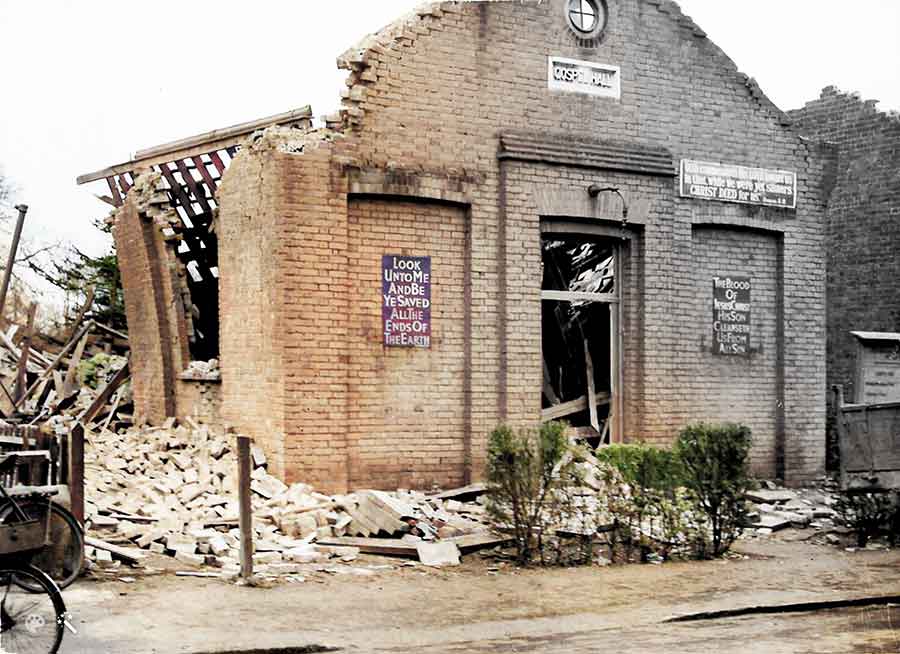 In London, Operation Pied Piper revved up, trainloads of kids transported to all points of rural life. The first two ships taking children to Canada were, in September, immediately torpedoed by German U-boats. The Volendam suffered no loss of life; they limped back to Scotland. The City of Benares, not so fortunate. Of the 406 passengers aboard, only 113 survived—and only 7 of the 90 children. Thus ended any English plans to send children abroad. And thus ended the "PARTICULARS" between Arthur and Ernest.

Still Germany bombed England.
Back to Ernest's grandchildren. My cousin Ann has no recollection of her older siblings being sent "anywhere but here." The family must have hunkered down. 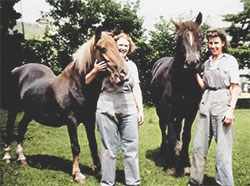 Not satisfied, I googled Croxley Green / WWII and learned that part of England's defense measures was to send teenage girls and young women out to farms in order to keep the food supply going, all the young men fighting overseas. Several Land Girls came to work in Croxley Green on Nabby Sears' farm. Did Brenda (18) become a "Land Girl?" Did she work for Nabby Sears? Did she get sent elsewhere? I'm getting way off course and Little Grandpa is getting lost. Still... Maybe if I can figure out who the Knights are in the back row of the 1923 family photo, I might pick up some information. Ann only ID'd them as somehow being related to the Wilbees—which has to be through Little Grandpa's Aunt Lillian Wilbee Knight.

And so for days I bee-bop down the bunny holes, taking notes on Knights galore with no matching data. For example, five or six Jane Knights but none who fit the age group of any Knight in the photo's back row. I am now entangled in a massive underground burrow, no light down here in the dark. I can't find my own out. 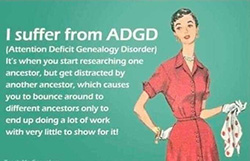 So you might see why I've diagnosed myself ADGD: Attention Deficit Genealogy Disorder, defined as:

When you start researching one ancestor, but get distracted by another ancestor, which causes you to bounce around to different ancestors only to end up doing a lot of work with very little to show for it.
I have to ask, Will I ever get Dad's memoir done? Will it be another two decades?

Good Lord, I shall be dead by then!