► TWO - Innocent: WE DO NOT LIVE IN THE GARDEN OF EDEN ANYMORE, Yet We Like To Pretend We Do.
“Is there really a dragon out there?”  - Eve the Innocent 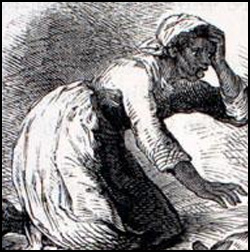 No temptation has seized you except what is common to man. And God is faithful; he will not let you be tempted beyond what you can bear. But when you are tempted, he also provides a way out so that you can stand up under it. - I Corinthians 10:13 (NIV)

SOMETIMES WE USE THIS  VERSE to deny the power of evil, and in doing so we let evil reign. Interpreting the word “temptation” to mean circumstances or events or crushing stress rather than what it does mean—temptation to do wrong—we blind ourselves to people whose burdens really are too heavy to bear. Erroneously assured in our minds that God will not allow too much stress to accumulate in a neighbor’s life, we sit back and allow our neighbor to suffer more than he or she can withstand.

In Uncle Tom’s Cabin, the novel that sparked the Civil War by exposing the evils of slavery, Tom watched a Christian woman kill herself in despair.

Mr. Haley was the slave trader. At one spot along the Mississippi River, while taking his “gang” south to sell, he left the steamboat to bring aboard a slave woman chirruping happily to her ten-month-old baby. She told Tom she was on her way down to Louisville to be hired out to work in the same tavern as her husband. Haley interrupted; he’d bought her and was going to sell her South.

So instead of going to live with her husband, she would never see him again. At Louisville, the distraught Lucy tucked her sleeping baby into a corner and ran to the front rails of the boat in hope of catching a last glimpse of a husband she’d never again see. While her back was turned, Haley sold her baby for forty-five dollars to a man who slipped away unseen.

Harriet Beecher Stowe pounced on the Northern reader for turning a blind eye to such evil. “The trader,” she wrote, “had arrived at that stage of Christian … perfection which has been recommended by some preachers … in which [they] completely overcome every humane weakness and prejudice. His heart was exactly where yours, sir, and mine could be brought, with proper effort and cultivation. The wild look of anguish and utter despair that the woman cast upon him might have disturbed one less practiced; but he was used to it. He had seen that same look hundreds of times. You can get used to such things, too, my friend ” 5

Tom tried to comfort Lucy by telling her of a caring Jesus. But, says Stowe, “the ear was deaf with anguish.”

“O! what shall I do?” Lucy moaned in the black of night. “O Lord! O good Lord, do help me!” At midnight Tom awoke, felt a stir of air, then a brush past his shoulder. In the silence of the night he heard the splash. When he looked, Lucy’s place on the deck was empty.

Today we have an underground network of domestic and sexual slavery. Refugees all over the world flee for their lives. We have a new working poor in the world’s wealthiest country. We have sexual discrimination, gender bias, whole cities where toxic water, crime, violence, and despair are common place.

But like the Northerners of 1852, and like Haley the slave trader, we’ve grown so used to the face of evil “out there, down there” that the anguish no longer means anything. Evil runs rampant, and people—even Christians like Lucy—kill themselves (or go crazy, or get sick, or live emotionally paralyzed lives) from the despair of it all. Sometimes the burden is too great to bear, and like the Northerners we can’t rest in religious triteness because for many “the ear is deaf with anguish.” We need to wake up because none of us live in the Garden of Eden anymore.
__________
5 Harriet Beecher Stowe, Uncle Tom’s Cabin, or Life Among the Lowly (Boston: John  P. Jewett, 1852). Chapter 12.