by Brenda Wilbee, in History - Women
She Could Out Pray and Out Preach White Patriarchy 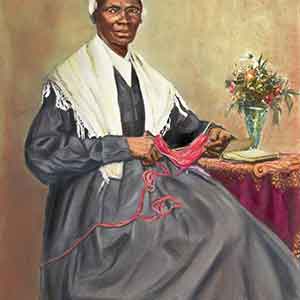 Born a slave in 1797​​​​ on the estate of Colonel Johannes Hardenbergh Jr. - a Revolutionary War hero and wealthy landowner 95 miles north of New York City - Isabella (Belle) was born child #9 to James Baumfree and Elizabeth Bett. She carried no memory of her older siblings; the Colonel had a habit of selling them off. Nor did she remember the Colonel. She was a toddler when he died in 1799. 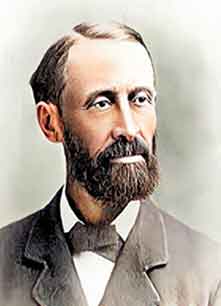 On his father's death, Charles Hardenbergh inherited livestock and slaves. He moved Belle and her parents and several other slaves to his own estate not far away - where he housed them in the unfinished cellar of his swank hotel. Decades later, illiterate and uneducated, Belle dictated her story to a friend, beginning with her memories of that cellar. In Sojourner Truth: A Bondswoman of Olden Time," Olive Gilbert writes:

A cellar, under this hotel, was assigned to his slaves, as their sleeping apartment. All the slaves he possessed, of both sexes, sleeping (as is quite common in a state of slavery) in the same room. She carries in her mind, to this day, a vivid picture of this dismal chamber; its only lights consisting of a few panes of glass, through which she thinks the sun never shone... and the space between the loose boards of the floor.

The uneven earth below was often filled with mud and water. The uncomfortable splashing, of which was as annoying as its noxious vapors, must have been chilling and fatal to health.

She shudders even now as she goes back in memory, and revisits this cellar, and sees its inmates of both sexes and all ages sleeping on those damp boards, like the horse, with a little straw and a blanket; and she wonders not at the rheumatisms, and fever-sores, and palsies, that distorted the limbs and racked the bodies of those fellow slaves in later life.

Still, she does not attribute this cruelty - for cruelty it certainty is...

Charles, like his father, sold James and Elizabeth's remaining children, one by one, leaving only Belle and new baby Peter.

In her dictation to Gilbert, she told how her parents sat for hours in their "dark cellar, lighted by a blazing pine-knot...recounting every endearing, as well as harrowing, circumstance that taxed memory could supply from the histories of dear departed ones, of whom they had been robbed."

Yet often they expressed gratitude that they hadn't fallen into the hands of Master Charles' siblings. One has to wonder what they were like.

Charles died 7 years later. Everything and everyone had to be sold. 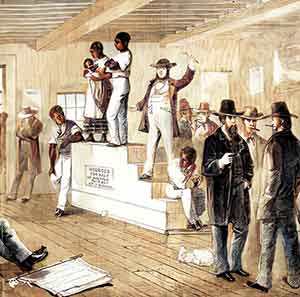 Belle's father, too old and rheumatic to work, was set free. Her mother, too; to take care of him. But off to the auction block went 9-year-old Belle and little brother Peter.

The Hardenberghs, Low Dutch, had always spoken Dutch on their estates. Consequently, Belle knew no English. That Peter was sold was evident, and she fought tears of panic and grief when it was her turn on the auction block. Not understanding what she was to do, white men irritatingly turned her this way and that, right, now left, pulled back her lips, pulled her arm up, felt her muscle, slapped her legs. Ik wil mijn moeder, she inwardly cried. I want my mother, and for a brief time she harbored hope she might yet go home. But then the exacerbated auctioneer threw in a flock of sheep to go with the sale and John Neely bought the whole kit-and-caboodle for $100. Sold!

The Neelys were English immigrants whose nearby store was not doing well. They blamed the Dutch. Nine-year-old Belle became a handy scapegoat.

To Belle, she'd hiss, "I told you the word is broom! Broom! Say broom!" Stinging slaps, beatings, whippings on a daily basis. One Sunday morning, Mrs. Neely sent her to the barn where Mr. Neely waited.

He pounced. He ripped off her shirt, tied rods together, heated them over a fire, and beat her senseless, leaving her unconscious on a bit of straw in a pool of her own blood.

Her father by some inexplicable miracle negotiated a resale - for $105 she went a local fisherman and pub keeper. Here she learned to swear. She also learned to dance and sing. Two years later, when she was 13 years old, Master #4 sold her to Master #5.

Of her five masters, John Dumont was the most humane. His wife, not so much. Sojourner eventually escaped in 1826 at 29 years old, taking only her baby, leaving her older four children with husband Tom. When Dumont caught up with her at the Van Wagenens' house, the whole matter was settled over a bowl of soup and "here's $25." Within days, the Van Wagenens had her emancipation papers notarized and signed, but not knowing what else to do Sojourner Truth remained a year as a domestic servant. It was when her son Peter was illegally sold south, she found her rage - and God's calling. 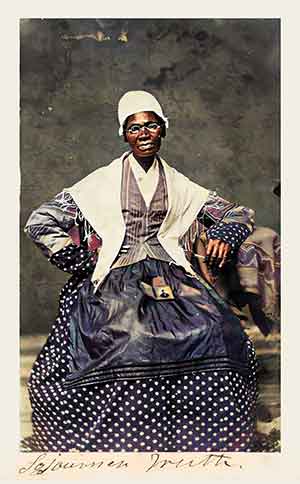 On June 1, 1843, Belle Baumfree legally changed her name to Sojourner Truth and devoted her life to Methodism and abolition of slavery. She embraced other reforms with equal fervor. Prison reform. Property rights. Universal suffrage. She is now the stuff of Legend, an icon of Justice in a world when Christianity embraced slavery and used the Bible to support oppression. Yet Sojourner Truth could out pray and out preach anyone, God no longer silenced.

He used a woman.