by Brenda Wilbee, in Christmas 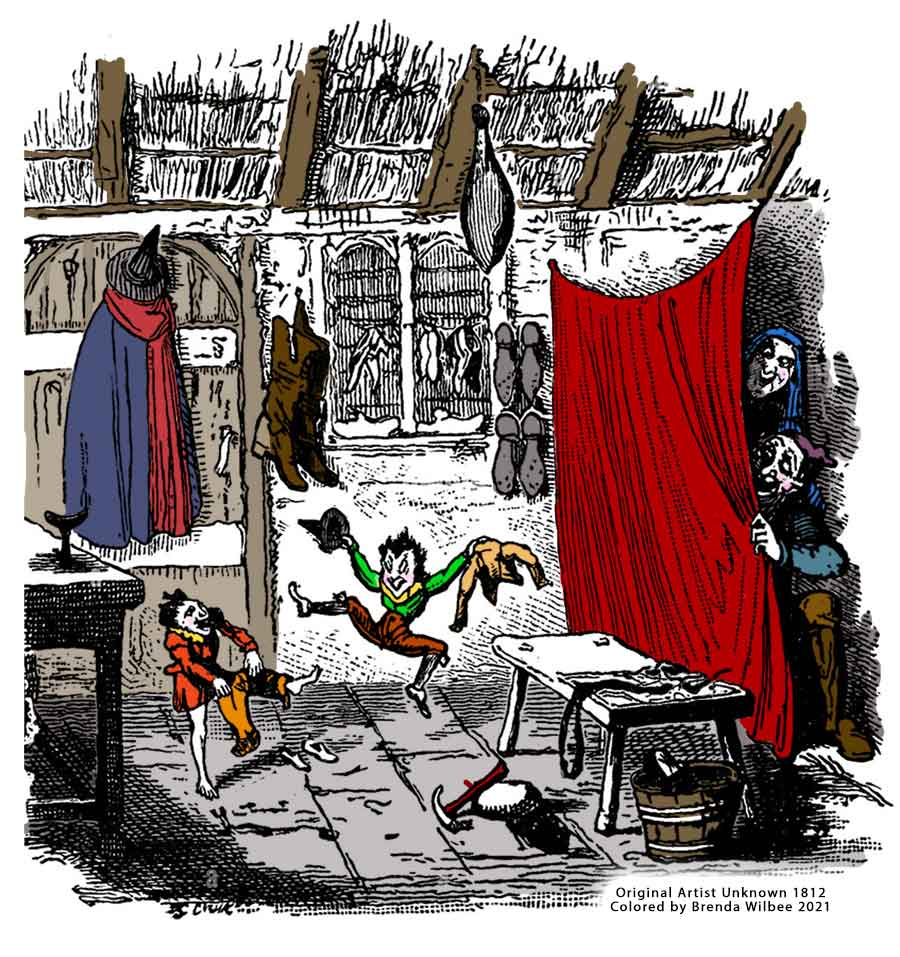 ONCE UPON A TIME a shoemaker by no fault of his own became so poor he had leather for one pair of shoes. In the evening he cut out them out. In the morning; he'd make this final pair. That night, he lay quietly down in his bed, commended himself to God, and fell asleep.

In the morning after he'd said his prayers and was about to sit down to work, the two shoes stood quite finished on his table. He was astounded! He took the shoes in his hands to more carefully examine. Not one bad stitch in them! Masterpieces both!

Soon after a buyer came in. The shoes pleased him so well, he paid more than was customary, and with the money the shoemaker purchased leather for two pairs of shoes. That night he cut them out. The next morning he was about to set to work with fresh courage, though he had no need. They were already made! Buyers gave him enough to buy leather for four pairs of shoes. The following morning, too, he found the four pairs made; and so it went. Whatever he cut out in the evening was finished by morning, so that he soon had his honest independence again, and at last became a wealthy man.

Now it befell that one evening not long before Christmas, when the man said to his wife, "What think you if we stay up the night to see who lends us this helping hand?"

The woman liked the idea. She lit a candle, and they hid themselves in a corner behind some clothes which were hanging, and watched. When it was midnight, two naked little men came in, sat down by the shoemaker's table, took all the work that had been cut out before them, and began to stitch and sew and hammer so skillfully and so quickly that the shoemaker could not turn away his eyes for astonishment. They did not stop until all was done, and they ran quickly away.

Next morning the woman said, "The little men have made us rich. We really must show how grateful we are. They run about and have nothing on. Surely they must be cold. I tell thee what I will do: I will make them little shirts, and coats, and vests, and trousers, and knit both a pair of stockings, and do thou, too, make them two little pairs of shoes."

The man said, "I shall be very glad to do it;" and one night, when everything was ready, they laid their presents on the table instead and concealed themselves to see how the little men would react.

At midnight they came in bounding and went at once to work, but found no leather pieced and ready to go. Only the pretty clothing. They at first were astonished, and then showed intense delight. They dressed themselves with the greatest rapidity, putting the pretty clothes on, singing,

Now we are boys so fine to see,
Why should we longer cobblers be?

They danced and skipped and jumped over chairs. At last they danced right out of doors. From that time forth they came no more, but as long as the shoemaker lived all went well with him, and all his undertakings prospered.
In our poverty God provides. In our gratitude, God brings abundance.
Prev Next
Created with Pub Site
Created with Pub Site