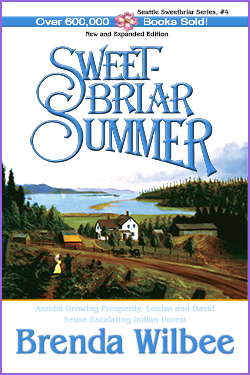 Sweetbriar Summer #4 (out of print)

Louisa Boren Denny opened her eyes to see the color and shape of things in her log cabin, then luxuriously rolled over and closed her eyes. The crowing of Good Morning and Peek-A-Boo had woken her in the gray light of dawn, but she left them to greet the morning alone and went away to sleep again. 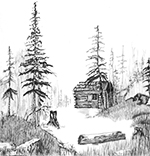 When she next opened her eyes, a strip of yellow sunlight danced in scalloped wedges along the logs beside her bed. Under her scratchy Hudson’s Bay blanket and shabby old quilt, one she and her sister Mary Ann had pieced together as children in Illinois, her bed was cozy with the warmth of her husband’s body next to her own. A morning chill hung in the air, yet the world was a nice place to be in, she thought, with its layers of warmth and chill and promise of further warmth.

Summer in Seattle, 1854, had passed swiftly in a kaleidoscope of color and forward movement. More people had moved in; gardens had burgeoned; Captain Webster had bought the coal mine and was making it produce. Ships now plied the waters so regularly it wasn’t uncommon to see one anchored offshore while waiting another to finish load­ing at Yesler’s wharf. And now Indian Summer was upon them with all its attendant colors and abundant harvests…day after day of rich golden sunshine, frosty clear nights, and these crisp cold mornings. The scalloped wedges, she saw, came from a shaft of amber light streaming in through the unshuttered window of her cabin.

If I don’t get up now, she realized with a start, I’ll miss the fog patches lifting off the sea! Unwilling to disturb her husband or waken her ten­-month-old baby girl, Louisa eased out of bed, pulled on a pair of socks—tucked beneath her pillow to keep warm!­ She donned her doeskin moccasins, the first she’d ever made, thanks to Curley’s wife Sally Jo, then tiptoed across the earthen floor. She slipped into her husband’s bulky jacket and let herself outdoors.

The autumn air greeted her with the sharp scent of sea salt and kelp, a pungent seasoning that gave a gentle sting to the early morning stillness…stirring within some half­ remembered pain, or old sorrow that no longer hurt. She passed her sweetbriar, growing beside the door, to hurry along the path to a short cliff and beach below. Along the trail, her bush dahlias —still in bloom—gave further lift to her awakening spirits, as did the splendid view. She and David had built their cabin two miles north of Seattle, overlooking Elliott Bay of Puget Sound, Territory of Washington. Across the water, nearly thirty miles away, she could see the high jagged mountain range of Washington’s Olympic Peninsula. These snowy mountains framed the western shore of the Sound, and Louisa, her light brown eyes focused on the pristine beauty, breathed deeply into her lungs the tangy salt air.

She was a tiny woman. Flawless skin, rosy cheeks, lively happy eyes, glossy black hair that put one in mind of a china doll. But those who knew Louisa Boren Denny knew she was not that fragile. Hers was a character born of physical strength and forceful moral fiber. And as she surveyed the wakening world around her, so far from home in Cherry Grove, Illinois, and isolated by these mountains and sea, she thought of all that had happened to bring her here—to Puget Sound, the Promised Land of her dreams.

She thought of the long, arduous trek from Illinois, the heartbreaking separations from loved ones, the unceasing toil, the many dangers. She recalled their early days on the Sound, the struggle for survival, the curiously helpful Indians, the decision of David’s brother to relocate their city on the inside of the Bay. Better shelter and deeper water for a seaport, Arthur had argued. She remembered, too, the exciting arrival of Doc Maynard, the timely appearance of Mr. Yesler with his sawmill, the quickening of spring, the many new faces arriving almost weekly. Now here they were three years later with nearly 250 settlers living in and around the Bay, with scores more scattered along the rivers reaching far back to the Cascade Mountains behind her. Truly this was the Promised Land, the paradise for which she’d left Illinois and the friends she loved. For in this new land she and David had at last married. Here they would plant and build and cultivate, here they would raise their family, here they would nurture all the beginnings of Christian civilization.

She was not naive, however. Last winter had been dark and, at times, terrifying, with murders and escalating tension between the Indians and whites. Luther Collins, one of their county commissioners, had inflamed matters badly by lynching Masachie Jim (who’d killed his wife in a drunken rage) and then lynching two other Indians arraigned on murder charges of one Mr. McCormick, a white man. The governor, before leaving in the spring for Washington City with the urgent duties of their new territory, had ordered that Collins be tried for murde—as soon as Seattle’s District Court convened in the fall. Today. The Indians were to be assured, Governor Stevens had decreed, that what was good for the goose was good for the gander.

But was it? Would a white man convict another white man for lynching an Indian? Particularly an Indian who’d murdered his wife in cold blood? Yet if Luther Collins was not convicted, would the Indians retaliate? Because that’s how they were. An eye for an eye.

She could not dwell on this. The local Indians were friendly. True, there were rumors of discontent, but these came from distant tribes from far over the mountains, and soon Governor Stevens would return from Washington City to settle whatever was troubling them. Besides, she reasoned confidently, had Providence not guided them all safely thus far?

The tide was in and low-lying fog hovered lightly over the surface of the water like wisps of breath. How she loved watching these vaporous clouds kissing the water before vanishing into nothing. On the beach, below the short cliff upon which she stood, the mist gathered in tighter clumps amongst the wild rose bushes. Behind her, where the forest resisted the sun, the fog held thickly, wreathing the three-hundred-foot Douglas firs, cedar, and hemlock trees like smoke rings.

“Well, hello there,” she exclaimed, bending to pat Watch, their black Labrador hound who appeared out of the misty woods. But she recoiled quickly when she saw the dead squirrel he offered. “Oh, put that down! Goodness!”

Together they went back to the cabin and sat on the splintery front stoop, where she could more comfortably observe the thinning fog. Warm inside her husband’s coat, she scratched Watch’s silky ears and listened to the seagulls shriek as they swooped and soared overhead in the early morning sky. She listened, too, to the chickens fuss and cluck in their coop out back. The domestic and the wild. Truly they’d found the best of two worlds. She couldn’t imagine a more perfect life. Well, perfect enough. Without her best friend, there’d always be a lonely spot in her heart, and her mind drifted to the pretty blonde woman she grown up with. It had nearly killed them to leave each other. At times the loneliness for Pameiia could make her sad to melancholy. True, she had her sister, and Ursula McConaha was fun. But no one had the same gentleness as Pamelia, the same mirth.

“What’s a ro…tic night?” she asked one night when they were cantering their horses down a moonlight trail between Cherry Grove and Galesburg to spend the weekend with Sam Denny.

“A ro man tic night without a man.”

It took her two days to figure it out and then she’d laughed herself silly. She tried it out on Mary Ann, but Mary never did have a sense of humor.

A thump inside told Louisa that her beloved husband was stirring, no doubt lighting a fire. She could hear the familiar clang of the stove. Happy day, he was fixing coffee. A good man. She’d traded Pamelia for David, a good decision, one she’d never regret. But still… She missed her best friend, best of the best. A heavy clang. If he wasn't careful he'd he wake Emily Inez. And she fancied having their coffee undisturbed, though she was feeling a bit like she needed to nurse the baby soon. All in good time. And she was in no hurry to go to Seattle.

Would Chiefs Seattle and Curley be there? To hear today’s indictments? The door behind her creaked open. She felt the soft give of the stoop beneath her as her husband stepped outside. She scooted over to make room. Watch reluctantly gave up his spot and settled down between David’s boots on the bottom step.

“Thank you,” she whispered, giving her still-sleepy husband a smile, the coffee cup he offered wondrously warm in her hands.

“You’re welcome.” He grinned and gave her a kiss.

“You’re freezing—you have goose bumps on your arms.”

He sat beside her in his shirtsleeves, elbows on his knees, his own coffee cup pressed between the tips of his fingers. He leaned forward to take a sip and said, “Someone stole my jacket. I’ve been looking all over for it.”

They sat in companionable silence, drinking their coffee, watching the world brighten in the strengthening sun. Presently he asked, “How soon can you be ready to go?”

“What time do you have to be in town?”

He shrugged. “No special time. I’m just curious as to what the grand jury is up to. Rumor is they’ll indict more than Mr. Collins.”

“No.” She thought about this for a moment. “David?”

He glanced at her obliquely.

“What will you do if the new sheriff puts you on Mr. Collins’s jury? Will you convict him?”

He returned his gaze to the Olympic Mountains across the water. “I don’t know, I don’t like thinking about it.”

“What if you have to think about it?”

“No one wants more hangings.”

“But if he isn’t convicted, the Indians will retaliate against someone.”

“Well," she said with a sudden, weary sigh. “We’d better wake up Emily Inez. I need to feed her. And then we better get started.”

“Liza, try not to worry so. It’ll work out. It always does.”