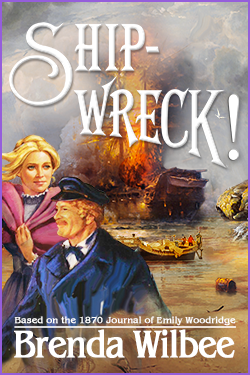 Shipwreck! (out of print)

Published by Stewart Goodfellow Publishing
“Emily, why must you go?” her sister asked.
Emily had only one answer. "I love him."
Based on the diary of Emily Woodridge, Shipwreck! chronicles a never-to-be-forgotten tale of love and courage on the high seas.
It was 1870. Emily and her husband, Captain Richard Gurney Wooldridge, were setting sail on the adventure of their dreams. Destination—the Horn of South America and beyond.

Invoragated by life at sea, Emily is determined to find her identity in a world of men and take her rightful place beside her husband. Then tragedy stikes. In the face of impossible odds, Emily seeks inner strength of faith in God to face the outward circurcmstances.

EMILY WOOLDRIDGE stood beside her husband on the deck of their brigantine, the Maid of Athens, shivering in the evening dampness of a London fog. She watched in disbelief as their crew was hauled aboard, slung like cargo over the shoulder of a brawny rigger and dumped unceremoniously down into the forecastle at the bow of the ship. They were drunk, every last one of them, and all unconscious.

"There, that be the last of 'em," said the rigger cheerfully. ''A bit too much to swallow, I see, but they'll be fine once they come to. I deliver good crews, Captain, sir."

Captain Richard Gurney Wooldridge nodded grimly. ''And did they sign on knowingly, willingly...soberly?"

The rigger ignored the Captain's sarcasm. "They come with experience, every last one of 'em. So see here, here's the Set of Articles, legally signed according to Port law. Ye sign 'ere, Captain, sir."

With a tight lip and low eyes, Richard Gurney Wooldridge began to study the papers thrust at him, bracing them over a knee. "One's missing," he said just as two more men lurched up the gangplank, one scruffy-necked and singing a sea chantey, the other clean-shaven and tidy and doing his best to pull the drunk along.

"Ah!"exclaimed the rigger. "Here comes the shipping master now, with your man. If you'll just finish your signature we can settle the advance."

But Captain Wooldridge put away his pen, slapped the document against his thigh, and marched across the main deck to the gangway. "Name and rank?" he de­manded of the scruffy man, voice deep.

"Fall in and explain yourself!"

A slightly built man with cheeks dappled by a sparse blond beard, the man had an insolent, surly air about him. He wore the usual uniform: white duck trousers tight about the hips and hanging long and loose at his feet; a bulky checked shirt; dark, navy jacket with gold buttons, unsnapped; black tarpaulin hat worn on the back of his head. His boots were encrusted with Lon­don's mud. One boot he thrust forward; he brought the other up to match. Thud, thud, echoing thumps against the deck. "My apologies, sir! The boarding house, sir, put something, I think, in the rum. At least it feels like it," he added, grinning boldly, lips twisting to the left cheek to reveal good teeth, and pressing his temples between thumb and middle finger. "It'll not happen again, sir. Oye!" He leaped backward, astonished. "A woman?"

He crashed into the shipping master. "I ain't shipping out with no bloody woman! No, sir, I ain't a king's fool!"

"That's enough!" said Richard Wooldridge. "Another word and you'll be swabbing the decks with the spit you can muster!"

"Now, now," wheedled Mr. Lowry, the shipping mas­ter, "sailors will be sailors—you know how it goes. They do have their superstitions. You've signed the Articles? No?"

"No," said the Captain dryly, and because the sun was going down he moved to where the light from the galley allowed him to read. "So you've delivered the six. Bosun:  Lawrence Jay. Seamen: John Harris, George Hayward, David Lawson, and William Oates. Ordinary Seaman: James Fielding."

Suddenly he stiffened. "The two months' advance payable to you?" he queried, lifting the papers closer to the light. "Lowry and Sons Shipping? I thought payable to the men's families. That's the deal we struck."

"Yes, well, it was," admitted Mr. Lowry, ''but there's been a slight problem." He clicked his heels together when the Captain turned about-face and started for the poop deck astern the ship. "They've run up a bill," he explained, hopping after the Captain and plunging down the companionway stairs, "at some of the boarding houses, and..."

The Captain entered the dining saloon. "Save your breath. You and the boarding houses run a well-greased ring, preying on weak men just in from sea, pockets full of pay. Sit down, Mr. Lowry. You send out your sharks, like that rigger on deck, to entice the land-starved men into the nearest boarding house for drinks and cards. Flies in a web. Oh, yes, I know how it works. But I had hoped, since I'd specifically asked that the advance of two months' wages be sent directly to their families, that you would do so—on your word. But no, you and your thugs saw to it, as always, that the families will see nary a farthing, for you must, I swear, fleece them all!"

The Captain circled the table, hands behind his back, jiggling the papers. He was a young man, 35, and powerfully built; tall, with shoulders that rivaled Grecian gods. His well-formed head topped his shoulders with all the authority of a man who knows himself well, and what he is fully capable of. Yet he was a gentle man too, the gentleness betrayed in the lines of his handsome face, particularly about the mouth. There was a softness to the bottom lip. But only a fool misinterpreted this for weakness. "Oh, Emily!" he said, startled but happy to see his wife at the door. Then, blue eyes soft with pleasure, he added, "Come in."

"Shall I light a lamp, Captain?"

"Please. I hadn't noticed it was so dark."

The lamp, flickering at first and then holding, illuminated the large, wood-paneled room, a room which served as both dining saloon and chartroom, and cluttered with instruments of all sorts. There was the clock, the barometer, and a large skylight with a compass beneath. In one comer hung a bird cage. Behind it a whaling harpoon. Books—for the Captain and his wife were an intellectual couple—sat tipped back into fenced shelving and filled the entire lower length of one bulkhead. China, either being packed or unpacked, lit­tered a sideboard. Emily took a seat. The Captain stopped pacing.

"Mr. Lowry," he asked, "What is going to happen in the morning when my crew wakes up to find themselves at sea, inden­tured—for that is what this is, indentured for nigh onto two years—with no memory of having signed any of these contracts? These signatures are not those of anyone possessing full faculties." He tossed the papers, all of them, onto the table.

"Still, it's a legal document. You only need show them. But supposing you're right, supposing there is trouble—you need only point out the law, sir. The law. Oh, they might grumble a bit at first, but soon they'll consider themselves lucky enough, take it all by and large, as part of their destiny. Now the hour is late. Lowry and Sons agreed to furnish you a crew, and a crew you have. And I believe you wish to sail within the hour?"

Angrily the Captain scrawled the date and his name, Richard Gurney Wooldridge, Capt. Maid of Athens, across the bottom of the Set of Articles and tossed them once again onto the table.

Mr. Lowry gathered up his sheaf of documents, and the bank note which the Captain handed over. "A word of caution," he said with a small nod to Emily. "Best not let them know she sails with you until you clear England. A woman brings bad luck on a voyage."

"I know nothing of the sort."

"I spoke not for you. I spoke for those drunken wretches in your hold." He tucked away the money. "I mean, of course, those fine seamen in your forecastle."

or
If you'd like to know when the new edition of Shipwreck! is reissued, please sign up for my email list.
I do not give out addresses.
Brenda@BrendaWilbee.com